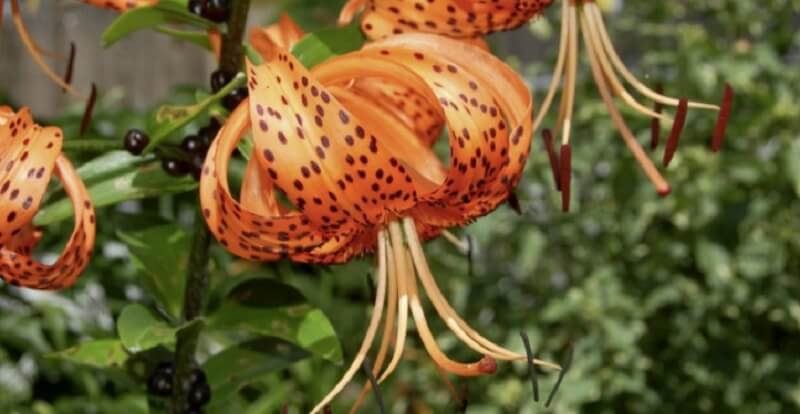 Lilies are one of the most confusing flowers; some are edible while others are extremely toxic, especially to pets. But with over 90 species, distinguishing between the poisonous and non-poisonous ones is a daunting task.

Tiger lilies are not poisonous to humans. In fact, some parts of the plant, like flowers and bulbs, are edible. But when it comes to pets, tiger lilies can be poisonous to both dogs and cats. However, the level of toxicity is different.

By understanding different types of lilies, you can be able to know which are safe, and which ones to avoid. Below is a detailed look at tiger lilies, and their effects on humans, pets, and other animals.

What are tiger lilies?

Tiger lily (Lilium lancifolium or Lilium tigrinum) is a lily species that is native to the Asian region. It is found in regions of China, Tibet, Korea, and Far East Russia. Naturalized versions of the plant can also be found in some regions in the USA, for example, Georgia and New England.

The tiger lily is popular for its orange and black flowers and is thus mainly grown as an ornamental plant. It also features an upright stem that can grow to about 80 to 200 centimeters. Another distinguishing feature of the flower is the tiny black bulbs (bulbils) that sprout where the leaves meet the stem.

READ ALSO:  How to shorten a chainsaw chain

Given that several lilies can cause allergic (and even fatal) reactions in humans, a lot of people are wary of these flowers. However, tiger lily does not fall into this category; it is not poisonous to humans.

But can you eat a tiger lily? Yes, you can. Despite their notoriety, several species of lilies are edible (by humans), and Lilium tigrinum is one such plant. In the Asian regions where the plant is native, tiger lily is foraged for its bulbs. These are then cooked (boiled or roasted), producing a tasty flavor.

Other parts of the flower are also edible:

Unfortunately, while you can eat tiger lilies, your pets are not so lucky. They are one of the top poisonous flowers, especially where cats are concerned.

Ingestion of small quantities of leaves, flower petals, pollen, or growing water can cause induce vomiting and lethargy. Without immediate treatment, the toxicity can cause kidney failure and even death.

What about other pets? Are tiger lilies poisonous to dogs? Yes, they can be. Although not as dangerous as in cats, they can still cause some reactions in dogs such as stomach upset and vomiting.

Tiger lilies effects on other animals

Some types of lilies can be poisonous to horses, goats, cows, chickens, and other animals. Tiger lilies are only known to be toxic to cats, and in some cases, dogs. However, there is limited information on how poisonous they can be to other animals, more so when consumed in large quantities.

Therefore, the best option is to avoid a situation where your animals eat them. Cultivate them for your food if you want, but avoid feeding them to other animals. After all, it is better safe than sorry.

Tiger lilies are popular in Asia, but they have been naturalized in other regions in the world. They are great ornamental plants but are also cultivated for food, with most of their parts being edible. However, they are considered to be extremely toxic to cats. They are also among the class of lilies that are sometimes toxic to dogs.

Disclaimer: The content on this page is for informational purposes only and not veterinary or medical advice. If you think your child or pet has eaten something potentially toxic, seek immediate treatment.