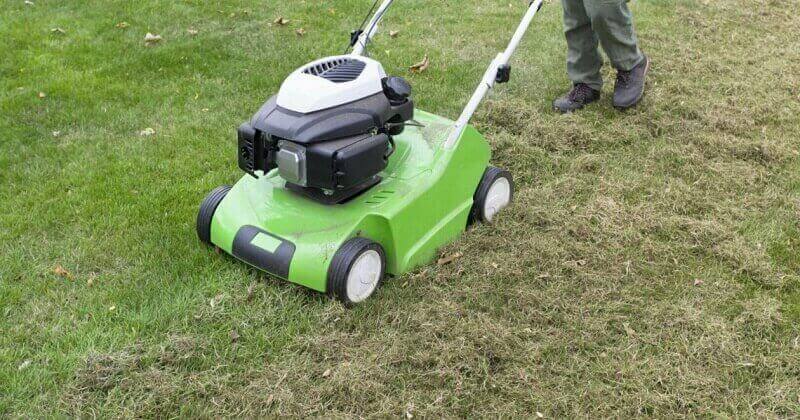 Most homeowners, gardeners, and farmers use the terms power raking and dethatching almost interchangeably, and there is a good reason for that. Essentially, both terms mean the same thing.

However, there are differences between them, which is in the method and effectiveness of the process. Read on to understand the differences, what each practice entails, and the pros and cons of power raking and dethatching.

Power raking and dethatching are two processes that work to solve the same problem –to remove thatch from the lawn. Eventually, lawns will grow a layer of thatch that consists of intermingled organic materials, including roots, stems, and shoots. It sits between growing grass blades and the soil layer.

As the thatch grows denser and thicker, the roots start to grow into the thatch instead of the soil. This hinders the ability of soil to drain water. At this point, you need a dethatcher or a power rake to remove the thatch and maintain a healthy lawn. But is dethatching the same as power raking?

What is power raking?

Power raking involves using fixed knife-type blades to slice the thatch on the lawn instead of ripping it out. It uses a dethatching machine set to a high to allow the blades to skim the surface. It is an excellent way of removing dead debris and crust that tends to build up on lawns.

Power raking has several advantages to a lawn. These include:

READ ALSO:  What to do with dead weeds after spraying

But power raking also has its disadvantages. These include:

Dethatching involves the use of flail-type blades that rip out excessive thatch from a lawn. The machine used for the process is often on a low setting to allow the blades to reach the soil surface. The primary reason to dethatch is to remove the thick layer of decaying plant material to allow water, nutrients, fertilizer, and air to reach the soil.

Dethatching has several advantages. These include:

Dethatching also has its downsides. These include:

Power raking vs dethatching – What is the difference

Dethatching uses the same machines as power raking. The difference is the type and length of cutting knives used.

READ ALSO:  How soon can you plant after using glyphosate?

A dethatcher is a small, residential-grade machine that looks like a push mower. It can attach to a tiller or mower and uses steel spring tines to penetrate and remove small amounts of thatch.

A power rake also removes thatch. However, it is a heavy-duty tool and mostly reserved for commercial or industrial use. You can use it as an electric rake that can work on a large area of turf or grass.

Power rake vs dethatcher, which one should you choose? It is advisable to go for a dethatcher because it is easy to use. Furthermore, it does not rip off much of the grass, unlike a power rake.

Is power raking bad for your lawn?

Power raking may not be the best option for your lawn. Generally, every lawn has a specific amount of healthy thatch, which is about an inch to three-quarters of an inch.

The thatch helps to protect plant roots and soil from the scorching sun. It also benefits the lawn by minimizing water loss, cushioning the soil, and making it less compacted.

Power raking pulls away too much of the thatch from your lawn. It can rip out healthy grasses in the process.

Is it better to power rake or aerate?

Aeration allows the lawn to breathe better. It also provides a path for vital nutrients and moisture to penetrate to the roots. The process reduces thatch build-up and ensures water, air, and fertilizer can get to the root system.

READ ALSO:  Why is my lawn mower air filter soaked in oil?

What is the best time to dethatch a lawn?

But if you have warm-season grass, dethatch the lawn in late spring or early summer. It is the time when the grass is growing and producing new runners. Most cool-season grasses do not need dethatching. If necessary, do it in early fall.