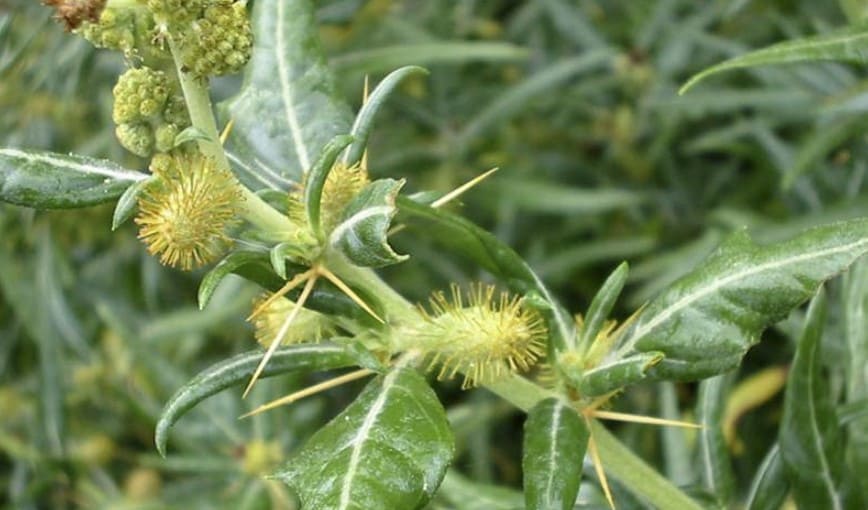 Weeds are not necessarily bad as some of them are edible, aesthetically pleasing, possess medical properties, and so forth.

However, most weeds growing out of their native origins tend to choke the rest of the plants by dominating the garden.

Some of them, especially the ones who reproduce by burrs can be very cumbersome to get rid of.

Burrs are dried fruit that has teeth/hook-like structures. They are a type of sticker weed.

Weeds with burrs will attach their seed onto the burr which will then latch onto animal fur or cloth fabric using its teeth-like structures.

Naturally, you will try and remove the burrs from your clothes once you notice them and the same applies to animals.

Once you throw it into another place, it starts growing and hence ends up spreading all over the garden.

Some of the weeds with burrs include;

It is an annual plant that reproduces by attaching its seeds onto burrs during Autumn and winter. However, it remains dormant during Spring.

This weed thrives in riparian areas that are prone to flooding. Therefore, most of the time, they will start growing on your garden, roadside or around where you store pastures.

However, they can grow anywhere since they have mastered the art of dormancy when the environment is not favorable.

You can easily spot the Noogoora Burr plant thanks to its very distinct features. Its stems are single branched and can be either green or purple depending on whether it is mature or not.

READ ALSO:  20 types of grass and their scientific names

As for its leaves, they have a sort of grapevine pattern that alternate on the branches. When the plant is in its prime, the leaves are green with purple veins.

The fruits of the Noogoora Burr are hard and have a wooden color. They are shaped like small egg that is covered with spines that are 5mm long.

Though their native origin is not known, Cockleburs have colonized North America and Europe to the point that at least 4-5 people from the aforementioned countries have come across them.

It belongs to the vast Sunflower family and has at least 4 known varieties.

This plant is very common because it thrives in Cultivated areas, river beds, or moist pastures. Every Cocklebur plant produces hundreds of small eggs shaped fruits.

Each of the fruits is covered with hundreds of hooked burrs that latch on tightly to things such as your cloth fabric.

Sometimes the burrs latch on so tightly to the point you cannot remove them with your bare hands.

Its stems and leaves are usually very rough and are covered with dark spots. The leaves are one of its most unique features as they are triangular in shape with a rough wavy-like edge.

The flowers of this weed are very inconspicuous and are responsible for producing its egg-shaped burrs with two beaks on either side.

A burr medic is very similar to a clover plant only that its flowers are yellow and not white. It is low-growing and hardly has any hair on its leaves and branches.

Speaking of leaves, its leaflets are divided into clusters of three and each of them is 4-35mm long.

Its seed is very hard and it may take years before it breaks down and start germinating. Therefore, this plant will likely not colonize your farm as fast as other weeds.

However, it is in your best interest to control it as soon as you see it because it has very deep roots and is resilient to many herbicides making it hard to control when it has spread.

Burr medics have a few beneficial traits such as it has the capacity to add nitrogen levels to the soil.

On the other hand, it will drain all the water from your garden and leave the rest of the plants dehydrated. Therefore, you have no option but to destroy it if you intend to grow anything else.

Rumor has it that Burdock is famous because its burrs were part of the inspiration behind Velcro.

It only develops flowers which then result in burrs in its second year of growth meaning it can be very easy to miss it the first time around.

The only viable way to distinguish it from other plants is through its broad dark green leaves with a whitish-pink stem that runs through the middle.

Also, its flowers are purple and closely resemble the shape of orbs.

Some people voluntarily plant the Burdock weed because it is an edible vegetable. It has a long taproot that can be chopped up and added to most soups. This makes it one of the most popular weeds with burrs.

READ ALSO:  List of common weeds in Virginia (with pictures)

Its texture and taste resemble the Japanese vegetable known as Gobo. It is said to have healing properties for issues such as diuretic or digestion difficulty.

If you are being bothered by the burdock, we’ve provided 5 ways to eliminate it completely.

Just like the name suggests, the garlic mustard weed is also edible. Many people cultivate it and eat it as a vegetable or grind it for use as seasoning.

It has dark green round leaves with a scalloped edge. In its second year of growth, both the leaves and stems smell and taste a little like garlic that has been mixed with mustard hence the name.

Unlike most plants, the leaves of Garlic mustard remain green all through the seasons including winter.

As soon as you notice it, try and apply any weed controlling method you know as this plant can be very invasive not to mention dangerous to the soil and nearby plants.

It’s imperative to note that Garlic mustard is only edible in its first year and half of its second year of growth.

After that, the leaves are very bitter and they start to produce a toxic substance that can be harmful to both humans and animals.

That’s it for the 5 most common weeds with burrs that you are likely to come across in your lawn or garden. Since some of these plants are invasive, you need to find the right eradication methods to deal with them instantly.