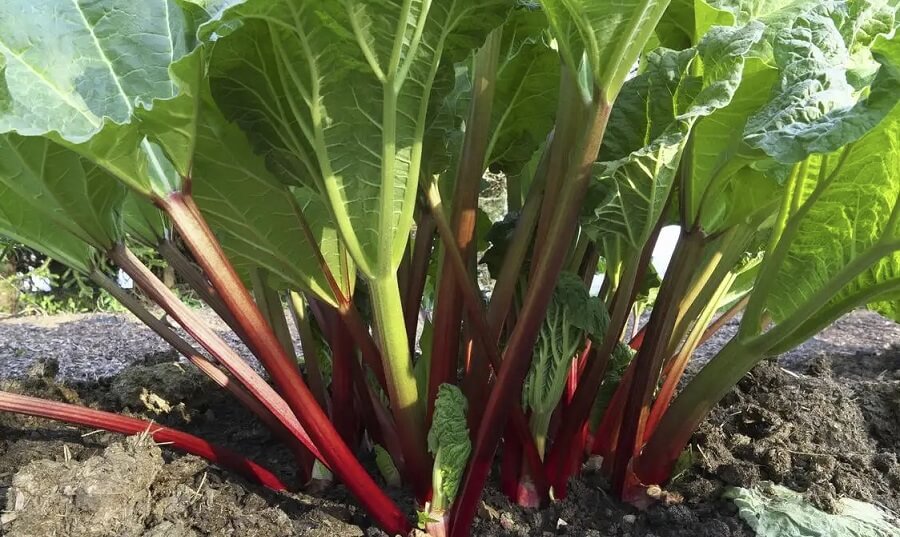 Rhubarb is famous for its fleshy leafstalks. Although it is distinctively unique, there are several weeds that resemble it closely.

Some of them have ‘rhubarb’ in their English names, making the distinction even harder. Due to the similarities, it is easy to confuse the weeds with rhubarb in your garden.

While some rhubarb-related plants are harmless, most are poisonous. However, you can easily identify them if you take a look at specific features as mentioned here.

Burdock weed is commonly known as the “wild rhubarb.” The choice of name is because it has large leaves, making it identical to the edible plant.

It also has a red stem-like rhubarb. The two factors make the weed one of the most identical plants to the delicious vegetable.

However, burdock weed is not edible. If you mistakenly cook it or put it in culinary, you may experience a mild to severe reaction.

Although you may notice the stem is hollow when preparing it for food, it is easy to overlook such factors.

So, what is the difference between rhubarb and burdock? Unlike rhubarb, the weed does not produce red and white flowers. Instead of the flowers, burdock weed has prickly burrs on the top.

So, if you see a rhubarb-looking plant without flowers, it is probably a weed. Besides the flowers, burdock weeds do not have smooth leaves like rhubarb.

In most cases, the leaves have coats of fuzz, which make them irritating when touched. If you are prone to allergic reactions, don’t try to distinguish the two plants by touching the leaves. Instead, check if the plant has flowers or not.

READ ALSO:  5 weeds with burrs that you are likely to find in your garden

If you notice the plant in question is burdock and not rhubarb, uproot it to avoid its widespread. If left unattended, the weed may spread, making your garden unsafe for food production. Here’s a detailed guide for eradicating the burdock weed.

Swiss chard is a large leaf plant that looks like rhubarb. Like the rhubarb, this plant is edible.

However, you should note that it may affect the taste of the food. Unlike rhubarb, which has a sour taste, the vegetable is less bitter, especially when cooked.

While it has almost similar leaf features, it is easy to spot Swiss chard in your garden. In humid areas, the plant has a fuzzy appearance, which is different from rhubarb plants.

Also, the stem is white (and yellow in some varieties) compared to the usual green and red. However, the two plants grow to an almost similar height.

Since Swiss chard is not harmful when eaten, you can leave it to grow with other plants. However, like other weeds, it will be competing for nutrients with your rhubarb plants.

Why did Swiss chard grow in your garden as a weed? Although it is uncommon, the vegetable may grow like a weed if the neighboring gardens have previously planted (or currently have) it.

Brazilian rhubarb is a flowering plant that looks like rhubarb. Thanks to its huge leaves, the plant is often referred to as giant rhubarb.

READ ALSO:  Types of sticker weeds and how to get rid of them

However, unlike the edible plants in your garden, the weed is extremely toxic.

Besides the enormous leaves and fast growth, the Brazilian rhubarb is easy to spot. For example, the weed has rusty red leaves, which are different from rhubarb. Also, the stalk is tall and green.

The reason why you are more likely to see Gunnera manicata in your garden is its impressively adaptive nature. The weed grows in all types of soils and textures.

Also, due to its alternative uses, people have started growing it as a commercial plant.

Is Gunnera Manicata invasive? Unlike most weeds, it is not invasive. However, it may compete for nutrients with other plants, affecting their growth.

Also, if mistakenly harvested and eaten, the weed may be poisonous. Luckily, it is easy to spot it in your garden.

Pokeweed is a poisonous and smelly plant that may grow in your garden. Although it is mildly invasive, it competes with rhubarb for nutrients and water.

Also, due to its poisonous leaves and stem, it is advisable to uproot pokeweed once you spot it. Besides being poisonous, it is the only ornamental plant that resembles rhubarb.

Its beautiful fruits make it easier to spot them in a garden. When the weed is smaller, you should spot it through leaves. They are narrow and have a faded green compared to rhubarb.

Even though the leaves are not as smooth as rhubarb’s, it is advisable not to touch them when examining the weed. The leaves have a chemical composition, which may affect your body negatively. For safety purposes, check if the plant has narrow leaves.

If you spot Pokeweed, how do you eliminate it? Although herbicides are the most effective way to eradicate the weed, a mixture of water and vinegar works fine, especially if your garden is organic.

You just have to mix 50/50 water and vinegar and spray on Pokeweed to eliminate it.

Skunk cabbage looks like a huge rhubarb, especially due to its spade-shaped leaves. However, unlike rhubarb, the skunk cabbage only grows in marshy areas, mainly in the wild.

Even though the weed grows mainly in unattended land, you may notice it on the edges of your garden. It has a skunky smell, which is different from the sweet and fruity rhubarb smell.

Also, the weed’s stem does not have any color, unlike rhubarb, which has either red or green stems.

Thanks to the distinctive smell, it is easy to identify the weed cabbage when harvesting or tendering your garden. Uproot it because it can be invasive in your garden.

The above five weeds look like rhubarb. However, some are poisonous. If accidentally consumed together with the edible vegetable can lead to serious health complications.